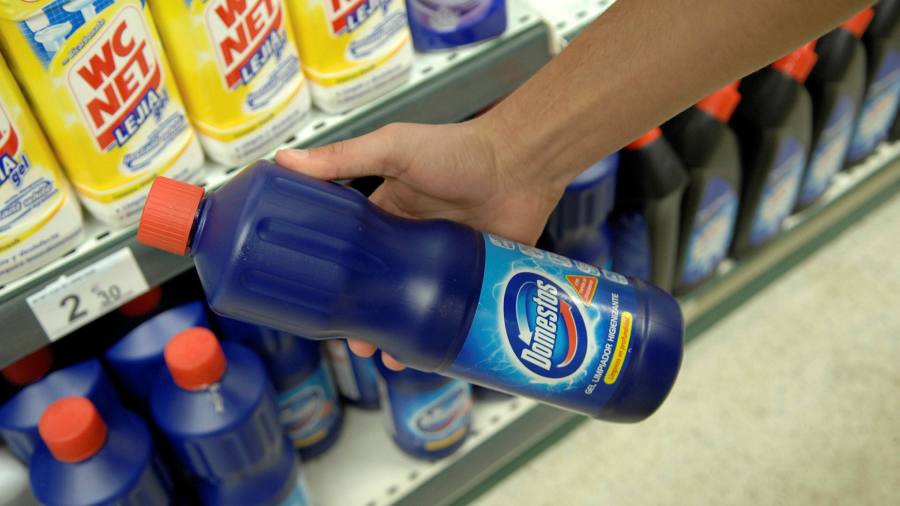 Unilever is planning to spend €1bn changing what it puts in its laundry and cleaning products to cut out ingredients made from fossil fuels.

The consumer goods group aims to eliminate fossil fuel-based chemicals from products such as Persil laundry powder and Domestos bleach over a decade. It is the first initiative of this scale for cleaning products.

“We have our diesel moment — I think everyone realises that the time has come that the cleaning industry has to pivot, and ask: ‘How do we clean up cleaning?’”

The initiative comes as chief executive Alan Jope seeks to halve emissions from Unilever products across their life cycle by 2030, while also pushing up sluggish sales growth.

Mr ter Kulve said the changes would mean working with a wider range of suppliers, such as the US microbe technology group Ginkgo Bioworks, in addition to traditional ones such as Dow Chemical.

Unilever’s homecare division has been boosted during the pandemic by demand for cleaning products such as Cif. But its biggest sellers are its laundry detergents, which include Surf, Radiant, Omo and Persil. Unilever makes Persil in the UK and a handful of other places. Elsewhere, it is produced by German group Henkel.

Efforts to reduce the greenhouse gas impact of laundry have previously focused on the energy consumed by washing machines.

But Unilever said a neglected source of emissions was fossil-fuel based chemicals in the products, such as surfactants and soda ash, which breaks down grease and soften water.

These account for almost half the products’ carbon impact, said Mr ten Kulve. Their replacement will enable the company to cut 1m tonnes a year of fossil fuels from its supply chain, he said.

Unilever will replace some ingredients with plant-based alternatives: for example, Persil in the UK has reformulated its liquid detergent to use plant-based stain removers.

The Quix dishwashing brand in Chile now uses rhamnolipid, a natural and biodegradable surfactant that can be produced by bacteria.

Unilever acquired Seventh Generation, a Vermont-based maker of plant-based cleaning products, four years ago, but Mr ten Kulve said converting the mass market to entirely plant-based products would use too much land.

Instead, for some ingredients, Unilever will look to change sourcing: for example, it is investigating surfactants that are made from plastic waste.

Mr ter Kulve said: “We know that the consumer wants to make green choices as long as they are not more expensive, and the products don’t work less well.”

The changes will reduce overall emissions from its products by about a fifth, the company estimates. It will make further cuts by reducing plastic packaging.

Carole Ferguson, head of investor research at CPD — which runs an environmental disclosure system for investors — said the initiative was a sign of the growing sophistication of corporate initiatives to cut emissions.

“It’s these kind of projects which will give investors confidence they are truly trying to tackle the problem,” she said. “Projects like this get away from greenwashing.”