The White House may be considering a controversial and deadly path through the coronavirus pandemic: herd immunity before a vaccine is ready.

The Washington Post reported on Monday that Scott Atlas, a neuroradiologist who joined the Trump administration as a top pandemic adviser earlier this month, has urged the president to adopt Sweden’s laissez-faire approach.

Herd immunity is the point a population reaches when enough people become immune to a virus to stop it from continuing to spread.

The most obvious path to that threshold is through mass vaccination. But five officials recently told the Post that Atlas, who is a healthcare policy fellow at Stanford University’s conservative Hoover Institution, encouraged Trump to pursue herd immunity before a shot becomes available, as Sweden has. That would happen by reopening businesses and allowing the virus to spread among the young and healthy, while keeping elderly or vulnerable people at home. 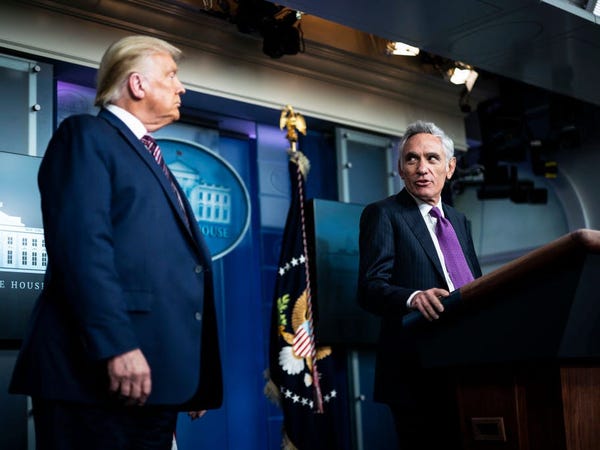 “This is simply wrong,” Marc Lipsitch, an epidemiologist at the Harvard TH Chan School of Public Health, said on Twitter on Monday. “Herd immunity is not a strategy or a solution. It is surrender to a preventable virus.”

Indeed, experts say that without a vaccine, the only way to herd immunity is through mass death and economy-crippling illness — far beyond what the US has already endured. Plus, Sweden already showed the world that this anti-strategy doesn’t work.

Shortly after The Post published its report on Monday, Atlas released a statement denying any push for a herd-immunity strategy.

However, herd immunity has come up at the White House before, according to prior Post reporting: President Trump suggested it in a Situation Room meeting on March 14.

“Why don’t we let this wash over the country?” Trump reportedly asked Dr. Anthony Fauci, director of the National Institute of Allergy and Infectious Diseases.

According to the Post’s report, Fauci initially didn’t understand what Trump meant by “wash over.” But when he realized, he became alarmed.

“Mr. President,” Fauci responded, according to the Post, “many people would die.”

Still, Sweden in some ways took the approach Trump was asking about: Unlike most of the world, the country never locked down. Shops, bars, and restaurants remained open. Students went to school. And Sweden ended up with a far more deaths than neighboring countries that did shut down: Its deaths per capita are more than five times higher than Denmark’s, nearly 10 times higher than Finland’s, and 11 times higher than Norway’s.

The strategy doesn’t seem to have helped Sweden’s economy, either: The country has suffered a larger GDP slump than its neighbors.

The US is nowhere near herd immunity

So far, more than 6 million people in the US have tested positive for COVID-19. That’s an enormous number, but not nearly enough to get close to herd immunity.

Michael Neel, funeral director of All Veterans Funeral and Cremation, wears full PPE as he looks at the US flag on the casket of George Trefren, a 90-year-old Korean War veteran who died of the coronavirus in a nursing home in Denver, Colorado, April 23, 2020. Rick Wilking/Reuters

“There are still 90%-plus of Americans who are still subject to getting this virus,” Adm. Brett Giroir, a pediatrician overseeing the US’s coronavirus testing efforts, told reporters in a call on Wednesday. “Now that’s different in some parts of New York and some parts of New Jersey and Detroit. But overall, the virus is in a target-rich environment.”

It’s unclear exactly how many more people would need to be infected to achieve protection through herd immunity. Epidemiologists calculate this number based on a metric called R0 (pronounced R-naught) — the number of people to whom an average infected person passes a pathogen. For the coronavirus, that’s about 2 to 2.5.

That means that about 50-70% of the population would need to be immune in order to stop the virus’ spread. In the US, that’s about 165 million to 230 million people. With the COVID-19 death rate estimated to be about 1%, that means reaching herd immunity could cost the US as many as 2.3 million lives.

Grave diggers lower the coffin of a person who presumably died of COVID-19, as mourners wearing face masks gather in the special-purpose section of a graveyard on the outskirts of Saint Petersburg, Russia, May 13, 2020. Anton Vaganov/Reuters

Still, some research has suggested that the herd immunity threshold could be as low as 20% of the population, since some groups of people have more interpersonal contact than others. If just those groups were to reach herd immunity, that could significantly decrease the virus’ opportunities to spread. But even in that optimistic scenario, about 600,000 people would still die.

Young people are not isolated, and they’re not safe from severe illness

The Swedish approach to partial herd immunity, which Atlas reportedly favors, involves keeping vulnerable people at home while allowing the virus to spread among young and healthy people, who face a lower risk of death.

A young woman gestures as a crowd of young people wait to hear President Trump deliver an “Address to Young Americans” at the Dream City Church in Phoenix, Arizona, June 23, 2020. REUTERS/Carlos Barria

But even this would result in mass death in the best-case scenario. If 20% of people under 65 in the US got the coronavirus at a 0.5% death rate (which is lower than the US’s current case-fatality ratio of 0.8% for that group), about 275,000 of them would die.

That optimistic scenario — if you could call it that — is unlikely, since young, healthy people still interact with vulnerable people: family members, teachers, coworkers, neighbors at the grocery store.

“Even if we may have a mild case, we should always remember that there may be another person — who could be young or old — who may have severe condition, and could even die,” Tedros Adhanom Ghebreyesus, director general of the World Health Organization, said in a briefing on Monday. “Accepting someone to die because of age is moral bankruptcy at its highest, and we shouldn’t allow our society to behave this way. We should care for one another.”

Plus, even if the government could prevent the virus from seeping into high-risk populations and fewer young people die than expected, herd immunity would still come at a heavy price. Some young people end up with debilitating long-term coronavirus symptoms: fatigue, difficulty breathing, and kidney damage to name a few.

And many young people get sick enough to be hospitalized; if mass waves of infection get large enough to overwhelm hospitals, that leads to more preventable death.

“Humans are not herds,” Mike Ryan, the WHO’s executive director of health emergencies, said in May. “I think we need to be really careful when we use terms in this way around natural infections in humans, because it can lead to a very brutal arithmetic which does not put people and life and suffering at the center of that equation.”